Breaking News
Sayyed Nasrallah: I Will Deliberately Delay Tackling Dangerous...
Iran announces first move against US for seizing...
Iran to provide full subsidy on electricity for...
Zionist forces fire over 20 phosphorous shells towards...
Iran Blasts Great Satan US for Reassuring ‘World’s...
IRGC seizes over 1 ton of illicit drug...
Islamic Revolution lovers’ presence in Syria defeated US
Normalization with Israelis against regional peace, stability
Iran can be model for other Muslims in...
Iranians’ distrust of US hits its highest in...
Home Americas My skin color is not a crime, but your racism should be

My skin color is not a crime, but your racism should be

The US is now going through widespread racial unrest following the killing of a 46-year-old black man George Floyd, whose repeated ‘I can’t breathe’ minutes before he died under the knee of a Minneapolis police officer on May 25 is being chanted worldwide in protest against the US systemic racism and police brutality.

The brutal killing of George Floyd, a 46-year-old black man suspected of passing a counterfeit $20 bill, under the knee of a Minneapolis police officer on May 25, 2020, has sparked worldwide rallies in solidarity with anti-racism protests currently underway in the United States.

Caught on a phone’s camera by onlookers, the viral video shows a white police officer, Derek Chauvin, pressing his knee to Floyd’s neck for almost nine minutes while Floyd was handcuffed face down in the street. “I can’t breathe,” Floyd says repeatedly while three other officers watch. “Please. Please. Please. I can’t breathe. Please, man.” According to the complaint submitted to the court, during the final three minutes, Floyd was unresponsive and had no pulse, but officers made no attempt to revive him and Chauvin kept his knee on Floyd’s neck even as arriving emergency medical technicians attempted to treat him.

The incident in itself is harrowing enough to invoke such worldwide outrage and abhorrence over the loss of innocent life at the hands of what is actually sworn to protect the said innocent lives, but that doesn’t even begin to cover the actual extent of the systemic racism and carnage against the African-Americans that have been in place in the United States for hundreds of years.

A quick, simple search online will bring up over 100 names of African-Americans who have been killed by the police or in police custody while unarmed. In fact, Floyd’s ‘I can’t breathe’ was a haunting echo of what Eric Garner had repeated 11 times before losing consciousness while lying face down on the sidewalk. Garner, a 44-year-old African-American man, died on July 17, 2014, after an NYPD officer, Daniel Pantaleo, put him in a chokehold while arresting him on the suspicion of selling single cigarettes from packs without tax stamps. The hashtag “#ICantBreathe” gained worldwide support with over 1.3 million tweets in December 2014 after the officer was acquitted from any charges. Pantaleo did not face any indictment and was fired over five years after Garner’s death. 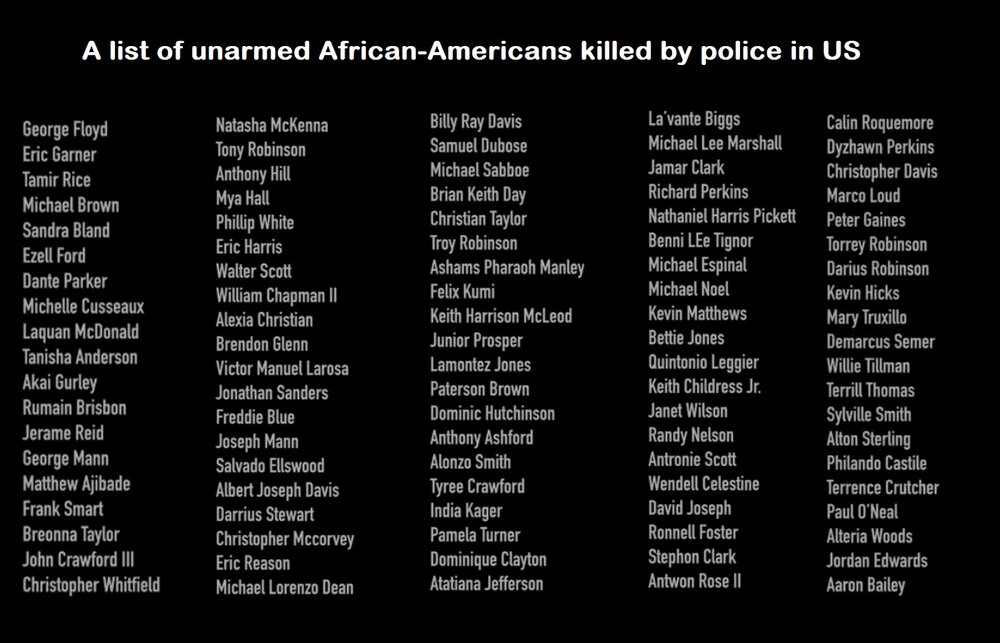 Associated with the Black Lives Matter movement, ‘I Can’t Breathe’ has now become a slogan chanted by protesters against police brutality and institutional racism in the US.

The US national security adviser Robert O’Brien may wish to look the other way by saying that he doesn’t believe in systemic racism in policing and talk all he wants about some ‘bad apples’ in the law enforcement, but that doesn’t change the glaring statistical facts that African-Americans, despite making up only 13% of the US population, are two-and-a-half times more likely than white Americans to be killed by the police. Black teenagers are also 21 times more likely than white teenagers to be killed by police.

A truly tragic case in point, which is credited as one of the several police killings of black Americans which sparked the Black Lives Matter movement, is the death of twelve-year-old Tamir Rice, who was playing with a toy gun in a Cleveland park when police officer Timothy Loehmann got out of his cruiser and immediately shot the boy, who died in hospital the next day. The officer was not charged in the killing, which incited public protests over police brutality against black people, further intensified after a grand jury decision to not indict the police officer who fatally shot Michael Brown, an 18-year-old black man, who, according to eyewitnesses, was unarmed and had his hands up before he was shot. The “Hands Up, Don’t Shoot” then became a defining slogan of the protests in Ferguson.

According to a study by researchers from Northeastern and Harvard University, which analyzed fatal shootings by police in 27 US states from 2014-15, it was revealed that among those who were “unarmed and appeared to show no objective threat to police, nearly two-thirds of the victims were Hispanic or Black.”

Also, a 2019 study by the US census bureau and Statistia.com shows that African-Americans are more likely to get fatally shot by police than other ethnic groups. 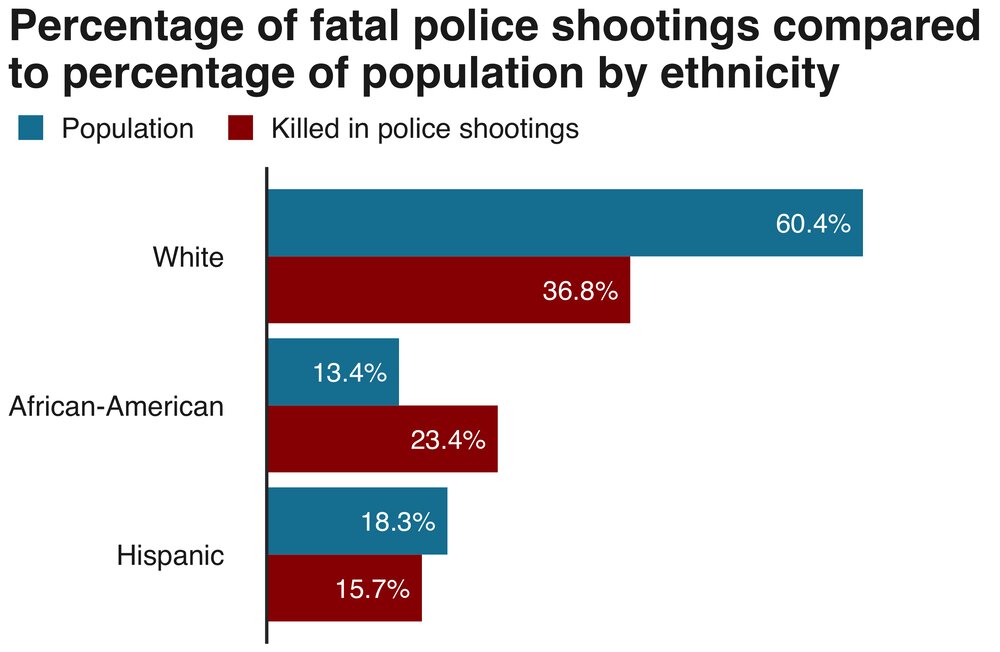 The US is now going through the most widespread racial unrest in its history since Martin Luther King Jr. was assassinated by a white supremacist in 1968.

The visceral protests, mainly peaceful, have been calling for an end to racism and discrimination while expressing anger and frustration over the continued acts of the police killing of black Americans, which, in many cases, do not even face indictment.

The US President Donald Trump, whose racist remarks and stances have been numerous enough to have a Wikipedia page of its own, took a hard line on the protests, even going so far as to threaten to send in the military to quell unrest.

According to the latest reports, at least 9,300 people have been arrested across the United States amid the ongoing protests. Curfews have been put in place and the US National Guard has been stationed in some cities, yet the protesters have largely remained undeterred. Not even the coronavirus pandemic could keep the protesters at home.

Racism has taken on many ugly faces during the colonial era and afterward, rearing them at its most extreme in genocides and slavery, and in its more subtle but no less dangerous forms like segregation and immigration laws. It took the African-Americans many decades to move past the segregation law on buses, to finally having an African-American as a president. But Racism has its vicious claws dug in too deep and as long as white supremacy is touted at the governmental and institutional levels, Goerge Floyd will not be the last African-American victim of police killings.

More Than 900 US Healthcare Workers Died of...

US Serviceman Killed in Syria

China Condemns US Requirement to Close Consulate in...

US Flies Surveillance Aircraft over Korean Peninsula to...