Heartiest congratulations to you on a very special occasion in this blessed month of fasting. Today is 15th of Ramadan, the day Prophet Mohammad (S) became grandfather for the first time.

On this blessed occasion when in the year 3 AH, his daughter Hazrat Fatemeh Zahra and her husband Imam Ali (Peace Be Upon Them) became proud parents of a radiant son, we present you an exclusive feature on the person, who was the Prophet’s 2nd Infallible Heir, and whose relinquishing of the caliphate through a masterstroke of peace ripped the veil of hypocrisy from the face of his avowed enemy.

Imam Hassan (PBUH) the Leader of the youth in Heaven was born in the holy city of Medina on 15th Ramadhan in third year after Hijrah. He was one of the two persons in whom the progeny of the Holy Prophet of Islam (S) was limited. He was one of the four persons through whom the Holy Prophet of Islam (S) made the contest of prayer (Mubahila) with the Christians of Najran.

Imam Hasan (PBUH) the Second Holy Imam of the Muslims in the world was Divinely gifted with all great qualities to such an extent that he was outstanding in knowledge, tolerance, intelligence, bounty and velour.

On the Joyous, Happy and Auspicious Occasion of the Birthday Anniversary of Imam Hasan (PBUH), we extend our Heartiest Greetings and Warm Felicitations to the 1800 million-strong Muslim Ummah.

The Prophet on the commandment of God Almighty name his grandson “Hasan” which means “Excellent” and is Arabic for Shabar, who was the firstborn of Aaron, the brother of Prophet Moses (PBUH). As he grew up he greatly resembled the Prophet and along with his younger brother, Imam Hussain (PBUH), was hailed by the grandfather as Leaders of the Youth of Paradise. Another famous statement from the Prophet says: “These (grand)sons of mine are Imams (that is, Leaders), whether they rise or (decide to) sit.”

Not for no reason did the “Seal of Prophets” hail his two grandsons as Imams or “Leaders”, because leaders ought to have exceptional qualities, and as is clear till this day, none from amongst the Muslim Ummah have ever matched the virtues of Imam Hassan (PBUH) and Imam Husain (AS), who along with their parents and grandfather, were granted the aura of spotless purity by God Almighty Himself, as is evident by ayah 33 of Surah al-Ahzab, which says:

“Indeed, it is God’s decision to keep away all uncleanliness from you Ahl al-Bayt and keep you thoroughly purified.”

The Prophet, who had foretold the tragedy of Karbala and how Imam Husain (AS), would rise against an openly Godless tyrant in order to save Islam by giving his lifeblood, had also said that his elder grandson, Imam Hasan (AS), would unmask the hypocrisy of an ungodly charlatan, by giving away political rule of a vast realm, in order to save the Ummah from unwarranted bloodshed and discord. Today the 15th of Ramadhan, the birth anniversary of Imam Hasan (AS), makes us recall his “Great Sacrifice” in relinquishing the reins of the caliphate for the acquisition of which his archenemy Mu’awiyah ibn Abu Sufyan had resorted to every lie and deceit, including shedding of Muslim blood and spreading of sins in society. Imam Hasan (AS), whose spiritual authority was God-given and far above any election, selection, nomination and defection of masses, thus showed the worthlessness of the dubious institution of caliphate that had its beginnings in the scandalous gathering of Saqifa Bani Sa’da in Medina where his father’s divine-right of political leadership was usurped, and for which in the coming generations every vicious power-hungry ruler would stake claim, plunging Muslims into wars, bloodshed, and misery. This masterstroke of peace by Imam Hassan (PBUH) not only saved Islam and its ethereal teachings from any defilement, but ensured till the end of the world the prime position of the Prophet’s Ahl al-Bayt as the barometers of faith. 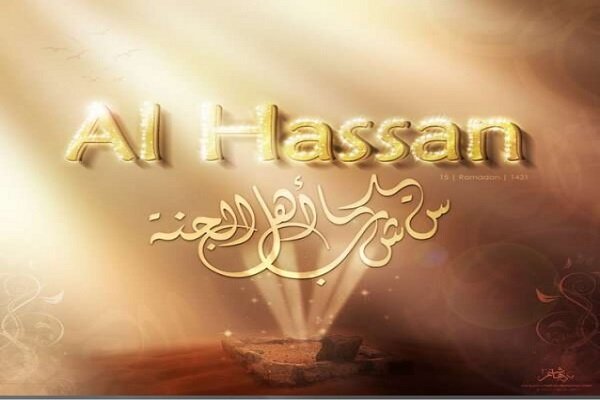 Imam Hassan Mojtaba (PBUH) was a picture of piety, worship, humbleness, bravery, and magnanimity. His most prominent characteristic was generosity. It is said that he never rejected a requester. When asked why he did not excuse himself from giving to others, Imam Hassan (PBUH) answered, “I myself am a beseecher in the Divine Court, so how can I turn down the request of those who approach me. The renowned Sunni Muslim scholar and exegete of the holy Qur’an, Zamakhshari, in his book “Rabi-al Abrar” has narrated from the Prophet’s servant Anas ibn Malek, who says: I was in the service of Hasan ibn Ali (AS) when a slave came and gifted a flower to him, and got the reply: You are free in the path of God. Anas says I asked him the reason for such generosity, and he replied by reciting ayah 86 of Surah Nisa’ where God Almighty has said:

“When you are greeted with a salute, greet with a better one than it, or return it; indeed, Allah takes account of all things.”

Imam Hassan (PBUH) then told Anas that granting freedom was better than the mere greeting of the slave, and that is the reason I emancipated him. In Munificence and forgiveness, Imam Hassan (PBUH) was the master of his time and the hope of the desperate. Like the Prophet and Imam Ali (PBUH), he was a model of simplicity, sincerity, piety, generosity, knowledge, compassion, bravery and truth. His virtues are beyond description. His table was always spread out for the poor sections of the society and on more than two occasions, he distributed his possessions among the needy.

One day, the caliph Othman ibn Affan, who was an extremely rich person, was approached by a poor man for financial help, and gave him 5 dirhams. When the poor person asked Othman to guide him to someone who can provide more help, he was asked to go to the Prophet’s two grandsons, Imam Hassan and Imam Hussain (peace upon them). Imam Hassan (PBUH) told the poor man that it is not permitted to beseech others unless in three cases, that is, if one owes blood money and cannot pay it; has a heavy debt and is not capable of repayment, or is in dire need but has nothing. He then said: Which of these three cases has brought you to me? The poor man merely said without specifying that it is one of these three cases. Imam Hassan (PBUH), without asking gave him 50 dinars, while Imam Hussain (PBUH) gave him 49 dinars to him. Note that the dinar is greater in value than the dirham given by Othman. The poor man then passed by Othman, who asked him what he received from the Prophet’s two grandsons. The man said you gave me some money but did not enlighten me regarding the rules for request, while Imam Hassan (PBUH) explained the finer points and gave me much more than what I received from you.

In 40 AH, following the martyrdom of his father, Imam Ali (PBUH) while engrossed in prayer in the mosque of Kufa in this blessed month of Ramadhan, Imam Hassan (PBUH) became caliph of a realm that extended from Central Asia to North Africa and which now includes over twenty countries. It was a critical period in Islamic history, as Mu’awiyah the rebellious governor of Syria was deceiving the people of Iraq with bribes. Imam Hassan (PBUH) aware of the flimsy faith of the Kufans, who could not be counted to rally to his defense if the need for military confrontation arose, decided to unmask hypocrisy by relinquishing the caliphate. He did not want unnecessary bloodshed and loss of life. On taking this decision, he entered the Mosque of Kufa and said:

“O people! Surely the pious is the cleverest of the clever, while the sinful is the most foolish of the foolish. By Allah, if you search for a man whose grandfather is Allah’s Messenger, may Allah bless him and his family, between the east and the west, you would not find him other than me and other than my brother Husain. You have come to know that Allah has guided you through my grandfather (Prophet) Mohammad, may Allah bless him and his family. So He has saved you from misguidance through him, raised you from ignorance through him, strengthened you after the abasement through him… Mu’awiya has disputed with me about a right that belongs to me, with the exclusion of him. So I have considered that which sets right the community and puts an end to the discord. You had pledged allegiance to me provided that you should make peace with whom I make peace with and fight him whom I fight. So I think I have to make peace with Mu’awiya and to put an end to the war between him and me… I think that sparing blood is better than shedding it. Through that I do not want anything except setting you right and your survival. I know that that may be a trial for you and a provision for a time.”

This is how Imam Hassan (PBUH) addressed the Kufans in a speech that has been preserved till this day as a testament of his right and truthful nature, while exposing at the same time the falsehood of Mu’awiya and all those imposters who styled themselves as caliphs in history. No doubt, Islam will forever remain indebted to the Infallible Progeny of Prophet Mohammad (S), whom God describes as Repositories of Divine Knowledge in the holy Qur’an, and whose mission was to safeguard Islam and humanitarian values, as per needs of the times, whether through foregoing their rights, or foregoing their life as well – as Imam Husain (AS) did at Karbala. Moreover, Imam Hassan (PBUH), as the divinely decreed heir of the Prophet and Imam Ali (PBUH), was aware that civil war would provide the Byzantine or Eastern Roman Empire, with a chance to attack Palestine and occupy Bayt al-Moqaddas. In view of these undeniable facts, Imam Hassan (PBUH) indeed made a uniquely wise move to save Islam and Muslims.

The 28th day of the month of Safar (the second month in the lunar Hijri calendar) marks the passing away of Prophet Muhammad (PBUH) as well as the martyrdom of Imam Hassan (PBUH), the second Ahlulbayt Imam.

Video: Is making women a means for satisfying...